This page is written by the game's inventor, Daniel Lee.

Orda Mirror is a game derived from Orda Chess. The idea of the game is using the Mongolian-themed Horde army from Orda Chess and pitting it against itself. Due to no longer needing to balance the army with the original chess army, one piece substitution is made. In the queen's spot, the new falcon piece replaces the yurt. 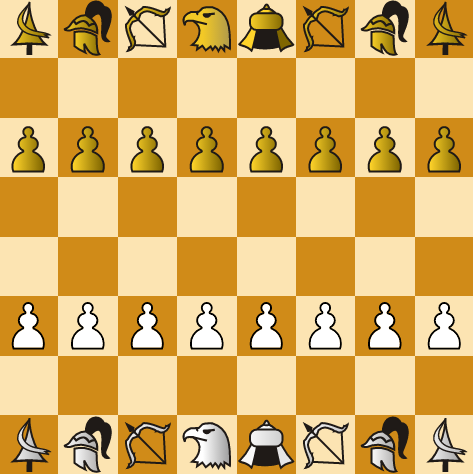 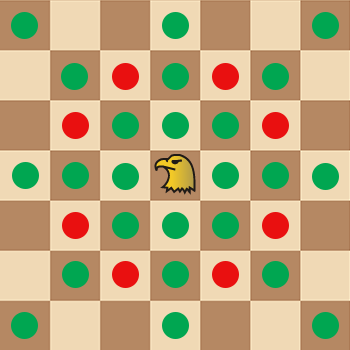 The Falcon is a divergent piece that moves and attacks differently. Unlike the other divergent pieces in Orda Chess, it captures as a knight, but moves as a queen. For the sake of sorting out which piece does which: one can remember it this way. All the cavalry pieces (horse archer, lancer, and kheshig) move like knights. However, the falcon is a bird and therefore attacks like one instead. Also being a bird, it can move swiftly like a queen (before swopping in for the kill at an angle). The exact value of the falcon is unknown. It's estimated to be very similar to a knight, but weaker in the early game and stronger in the endgame. The queen's movement slows it down early on compared to a knight (which can jump freely), but in the late game, it can move rapidly across the board unhindered, while the knight is much slower.

All other pieces are as in Orda Chess.

Pawns may promote to all Horde pieces (unlike in Orda Chess, where they can only promote to a queen or kheshig).

All rules are otherwise the same as Orda Chess, including campmate.

Orda Mirror can be played at Pychess and VChess.