Editor's Note: Courtyard was invented by Leonard Kalich Sr., and is (or was) a game distributed by FunDynamics. Having made reasonable efforts to contact them, we can only assume they have gone out of business. However this may not necessarily be true, so if anyone knows of how we could contact this company or the inventor, please let us know so we can request permission to continue publishing this description of the rules. Thank you.

This is another crossover game.  It was invented by Len Kalich (Leonard Kalich, Sr.) of Troy, Michigan.  He meant to combine the ease of learning checkers with the challenge and variety of chess. The following abstract of the rules is based on material copyrighted 1984, 1986, and 1987.

The board is ten squares on each side, checkered white and dark, except that the four central squares are replaced by a walled courtyard.  Each player has a dark square at the right-hand end of the nearest row.  Play is on dark squares only.  There are two gaps in the courtyard wall, one square wide, on the left-hand side as each player faces the courtyard.  It is each players goal to move his king into the courtyard through the entrance on his opponents side of the board, and so to win the game. A king cannot enter through the gate on his own side, and no other piece can enter the courtyard under any circumstances. 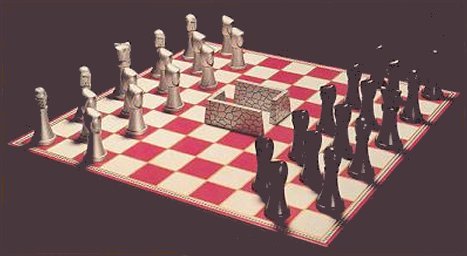