This is a computer-only variation of chess originally conceptualized by Cameron Hendricks and filled out and implemented by myself. A link to download the application is provided in Computer Play.

The general concept is that regular chess is played, but you can only see the places where you pieces can move and attack. There are a few exceptions to this, further detailed in the rules.

The board is setup according to the standard rules of chess. One exception is that I use green and blue pieces instead of the tradition black and white. It obviously has no affect, but it has been known to throw a few people off guard.

The pieces are identical to those found in the standard rules of chess. 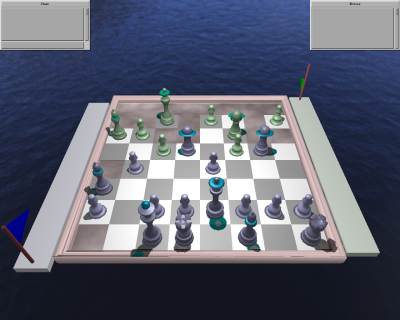 Click the info button in the game to learn how to find other players playing. Since this game has not (will not?) reached critical mass, you will probably need to have found somebody in advance to play against.
You can also read the rules at my web site.

As a new player, try to play defensively for the first 6 or so turns. The best attacks always have at least 2 other supporting pieces. This is because you will often lose an attack, but having a lot of support will often put you in the lead.

You must have Windows 95 or later with DirectX 7 or later installed on your computer. I have played the game on a machine as slow as 800 MHz, but it would probably run on a slower machine. Download the application and run it from anywhere. There is no installation.

A computer is obviously needed. Since this game has no artificial intelligence, you must also have somebody to play against.

I can be reached by email. You can also visit my web site. ﻿