This page is written by the game's inventor, Fergus Duniho.

Grotesque Chess is offered as a new member of the family of games that includes Carrera's Chess, Bird's Chess, and Capablanca's Chess. Unlike these games, it leaves no Pawn unprotected by a piece when the game starts.

Aside from differences in board, pieces, and setup, Grotesque Chess is played like FIDE Chess with the following differences: 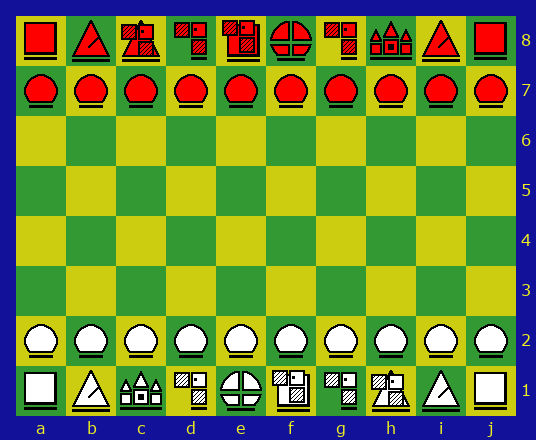 With that in mind, I might recommend this slightly asymmetrical variation in which only the King and Guard change position. As with the original setup, no Pawn is left undefended. By placing more of Black's most powerful pieces on White's King's side, it may make up for the first move advantage that White has.

If you have version 2.0 of Zillions of Games installed on your computer, you can play this game. Download file: largechess.zip.

You can also play Grotesque Chess against other people online using Game Courier.

The board shown above is made from cut-up mouse-pad style boards, and the pieces are natural and black colored Chess pieces with the Chancellor and Archbishop from the Camaratta Chess Kit. See the Chess variant construction set page for further details.