This page is written by the game's inventor, Andrew L Smith.

This was inspired by Ralph Betza's Augmented Chess. I liked how the Fibnif is a basic piece in Augmented Chess even though it's a combination of two augmenters and thought "hang on, can't I do that with any 2 augmenters to make a piece out of 3 augmenters", which birthed the idea of the Corps. After combining this with enough new augmenters to allow every piece to be different (rather than giving both copies of the same piece the same augmenter) I had something pretty different to the original on my hands! 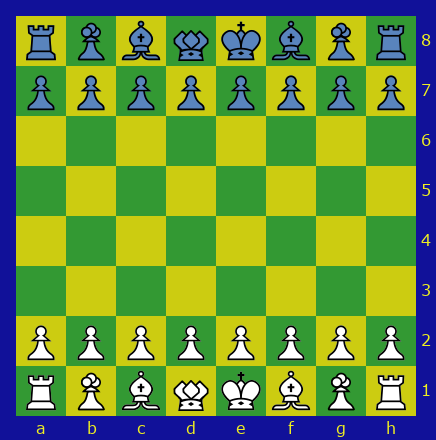 The Pawn, Bishop, Rook and King all move as they do in regular chess. Pawns cannot hold any augmenters, while Bishops, Rooks and the King hold one augmenter each.

The Corps (in place of the Knights) cannot move on its own. However, it holds 3 augmenters.

The Regent (in place of the Queen) is a stronger version of the Corps. On its own, it moves one space orthogonally or one space diagonally forwards. It also holds one augmenter, and two out of three of the following base pieces: Bishop, Knight, Rook.

Finally, pawns promote to Amazons, which combine the Bishop, Knight and Rook but still do not hold any augmenters.

The augmenters can be split into four categories: Queen line leapers, which move a fixed number of spaces orthogonally or diagonally; half-knights, which have four of the eight Knight moves; partial rooks, which move an unlimited distance but can only go in one direction; and the grasshopper which is in a category of its own.

Before the pieces start moving, each side must finish setting up their army. This happens in 5 stages:

Now, white is ready to play the first move.

The rules are the same as those of regular Chess unless stated otherwise.

Once the augmenters are chosen, there is no way to go back on your choice.

Each piece can move using its own basic capabilities or those of the augmenter(s) it has. For example: a Rook with a Ferz as its augmenter would be able to move any distance orthogonally or 1 space diagonally; and a corps with the Wazir, Dabbabah and Threeleaper would be able to move up to three spaces orthogonally, jumping over any pieces in its way.

If the Kings have different augmenters, they can use those augmenters to check each-other.

The King can use his augmenter to get out of check, and a King with a Partial Rook augmenter can move through check as long as his destination is safe. However, all the usual restrictions on castling (except the requirement to only use one hand, see below) still apply.

If a King is using the Dabbabah or the Side-Mover as an augmenter, the player must use both hands to castle by touching the King and Rook at the same time. This is to prevent ambiguity between Kg1 and O-O. If a player using both hands to castle attempts to castle illegally, they may move either the King or the Rook to comply with the touch-move rule. Players may castle with both hands even if they aren't using an augmenter that forces them to.

Upon reaching the opponent's back rank, Pawns must promote to Amazons; they cannot choose to underpromote.

If the two players of unequal skill play against each-other, they may agree to a material handicap to give the weaker player an edge. This can range from giving the weaker player a slightly stronger augmenter like the Camel or Gold General (with or without the restriction that the strong augmenter can't go on the King) to making the stronger player play without a Regent.

*Only availiable in variants

Like the Knight of regular chess, the Corps should be slightly weaker than the Bishop, but this difference is likely significantly less than a pawn.

These values are very approximate, and may change if the augmenter being used synergises well or badly with its piece.

It is ill advised to use an augmenter that can move to squares the piece can already access with its basic capabilities. For example, Rook+Wazir and Rook+Lance gain nothing from their augmenters. While Rook+Dabbabah is not completely useless because of its ability to jump, there are better augmenters for the Rook.

Since the King must be kept safe at all times, a long-range augmenter is helpful to get him out of danger quickly.

Make sure all your pieces can get to anywhere on the board! This isn't a problem for the Rooks, King or Regent, but it does cripple some combinations such as Bishop+Dabbabah and Narrow Half Knight+Alfil+Side-mover.

It's usually best if the Corps and Bishop on the side you plan on castling to can jump over the pawns in front of them. This can allow casting to happen quickly in a pinch.

As White must set up their pieces first, Black can react to White's setup and try to counter any weaknesses.

The 9 augmenters that can reach exactly four spaces should add roughly the same value as long as the above guidelines are being followed. Regarding the three augmenters that don't go to exactly 4 spaces, their values vary as the game progresses. The grasshopper is one of the stronger augmenters in the opening and its uniqueness means it can fit on any piece, but it loses its value as pieces get traded and is almost worthless in the endgame. On the other hand, the Side-Mover is incredibly powerful in the endgame (assuming it's on a piece that can move to any rank), but it doesn't provide any forward moves so it's almost useless in the opening. Finally, the Lance is useful in both the opening and the endgame, and its maximum forwardness makes for brutal attakcs, but it also has the lowest mobility of any augmenter.

Here is a sensible setup I made if you want to get started! It's probably far from optimal, but it follows all the principles I think make for a strong army.


In total, there are almost 40 million possible armies (though the vast majority of these include at least one stupidly placed augmenter and will therefore never get used). This means there are likely thousands of viable armies the players might choose, more than enough to make opening theory impossible.

This is the original incarnation of 12 augmenters chess. In this variant, the Regent cannot move on its own, like the Corps. However, it still keeps its one augmenter and two base pieces.

In this variant, it is generally best to use the Rook and Bishop as the Regent's base pieces.

Players may choose to play with 4 augmenters on one corps and 2 on the other, instead of having 3 on each. This will result in the armies having a single weak piece, which could make for interesting tactics.

Like in the original Augmented Chess, have the Kings not get any augmenters. This should make the game less drawish at the cost of removing defensive options. The freed augmenters may either be removed from the game or placed on a Corps.

A larger 10x10 board is used, a new basic piece is added, and 2 new augmenters are introduced. 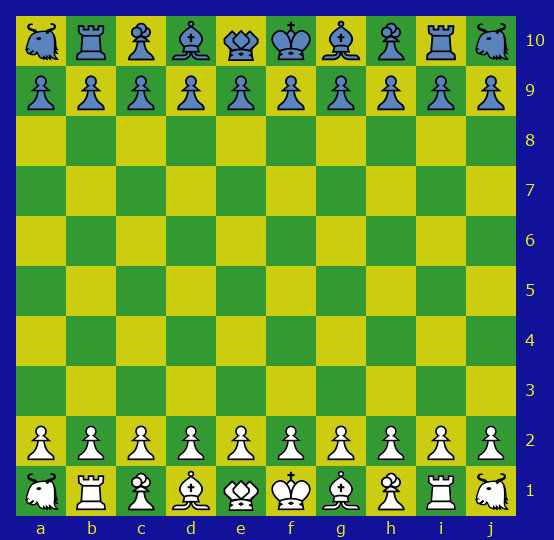 The new piece is the Bison, which can move to any space in a 7x7 square that cannot be reached in one move by an Amazon. Like the Knight, it can jump over other pieces. It can hold one augmenter.

The pawns' double-move capabilities have also increased. A pawn on the 2nd rank can move up to 3 spaces forwards. A pawn on the 3rd, 4th or 5th ranks can move up to 2 squares forward. However, a pawn on the 6th rank or beyond can only move 1 square forwards. A pawn can get from its starting square to promotion in 5 moves like in regular chess. A pawn that has made a double move can be captured en passant as usual, and a pawn that has made a triple move can be captured en passant on both the squares it moved through.

If neither the Rook nor the King have moved yet, there are no pieces between them, none of the squares between them are threatened by the opponent's pieces and the King is not in check, castling may be performed by swapping the King and Rook's places. Regular castling where the King only moves 2 spaces is not permitted.

Upon playtesting, I found that it is possible for white to force a trade of corps on move 3 using the combinations of Lance/Dabbabah+Grasshopper or Alfil+Threeleaper. If this is undesirable, the players could agree to ban certain combinations of augmenters from being on the same corps. These bans could also apply to particularly powerful or uninspired combinations such as Lance+Side-Mover, Wazir+Ferz, Crab+Barc and Narrow+Wide. Banning the "instant fork" combinations is highly recommended when playing with Unbalanced Corps.

There's nothing preventing players from using more than one of the variants listed above at the same time!