This page is written by the game's inventor, Jose Carrillo.

The Courier Elephant is a (kind of) new piece, designed for the game Courier Chess Moderno by Jose Carrillo.

Courier Chess Moderno is my attempt to modernize a very old game, with some contemporary Orthodox Chess rules (regarding castling, pawn moves and draw situations), while keeping a flavour of the old Courier Chess. 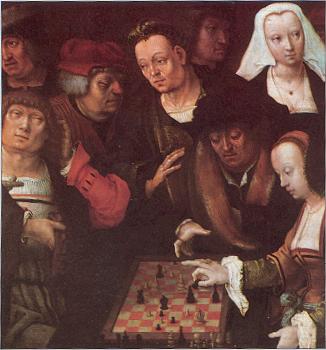 In trying to keep the Courier Chess flavour, the only piece that I had a problem with during the design phase of my new game was the Courier Bishop (represented by an Elephant), which moved like a Chaturanga or Shatranj Elephant (or Alfil).

The disadvantages of the old elephant inspired me to change the movement of the piece in Chess Courier Moderno, to give it a more modern look in the new game.

By 2008 I had already found and enjoyed another "old" game that already featured a much more useful elephant (or Bishop): Makruk (Thai Chess).

The Thai Bishop (Khon or Thon) moves like a Burmese Elephant (one step straight forward, or one step diagonally in any direction). Japanese Silver Generals move like this as well.

While this Burmese movement is very old as well (and it never made it to our Orthodox Chess), it is an improvement over the old Shatranj Elephant above.

Burmese Elephants are not color bound, they can reach all squares on the board, and can face enemy elephants in battle. All the disadvantages of the old elephant fixed at once by the Makruk Bishop!

Courier Elephants are therefore based on the Burmese Elephant movement, but with an additional improvement: their opening moves.

In the Makruk or Burmese Chess starting positions, the elephant (or Thai Bishop) is not hindered from moving in the first move by adjacent pawns, but this is not the case in Courier Chess Moderno.

In the initial Courier Chess Moderno setup above a Shatranj Elephant would have ONE advantage over a Burmese counterpart: the Shatranj Elephant can develop faster; right from it's very first move, because of it's 2-step leaps.

The ability to leap 2-squares in ANY forward direction, on their very first move, is what makes the new and improved Courier Elephants unique.

In addition to their regular Burmese movement, Courier Elephants have the priviledge of a single Shatranj Elephant (Alfil) 2-step diagonal leap for their first move, or a 2-step straight forward Dabbabah leap.

Courier Elephants are sort of "Burmese Elephant Pawns", they have the option of making an initial one or two-step forward (or diagonal) move (or leap):

With this major move improvement Courier Elephants can now reach all squares on the board and engage enemy elephants in battle, as well as develop right from their first move.

Courier Elephants also give protection to the previously undefended b & k-pawns in Courier Chess, and gives a very nice balance to the game as the pachiderms are now very useful short-range attacking pieces, that are similar in value to the long-range color-bound Bishops.

Courier Elephants can be exchanged with the regular Bishops, Knights or the Man, as they are all similar in value.

Games that use the Courier Elephant: 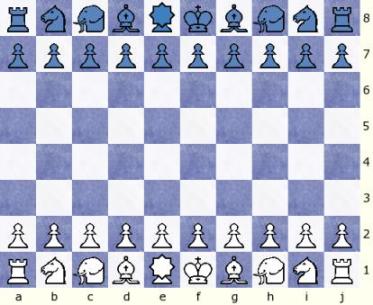 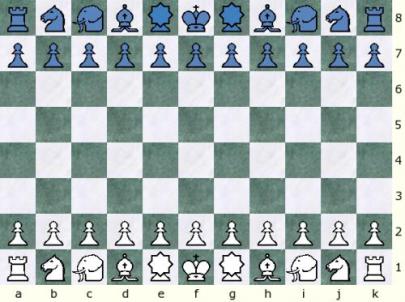 The Courier Elephant was created by Jose Manuel Carrillo-Muniz, from Puerto Rico in December 2008.

I want to thank my good friend Gary Gifford for his sugestion to add a 2-step straight forward leap to the Courier Elephant's opening repertoire. Originally the elephants could open with a Burmese Elephant move or a one-time 2-step diagonal leap, a la Shatranj Elephants or Alfils.


Chess Variants by the Author:

Other Pages by the Author: