This page is written by the game's inventor, Jörg Knappen.

This game is inspired by Charles Gilman's Knavish Chess. The new pieces, knave and debtor, have a definite shatranjian feel, therefore I plug them into the original game of Shatranj. 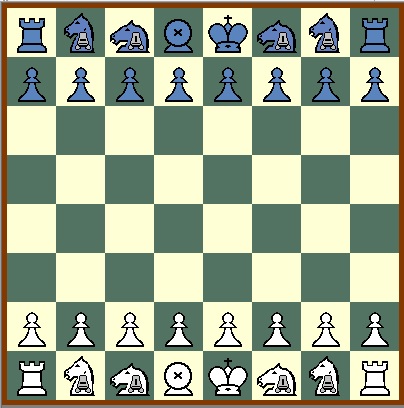 The Rook and the King are the same as in standard Shatranj and FIDE Chess (except for the absence of castling).

The Ferz moves one square diagonally.

The Shatranj pawns move like FIDE chess pawns without initial double move and without en passant captures. They promote to a Ferz on the eigth rank.

The rules of Shatranj apply. They differ from the rules of FIDE Chess in the following points:

Estimating the values of Knave and Debtor vs. Knight and Alfil leads me to the conclusion, that the Knavish Shatranj army qualifies for Shatranj with different armies.

Four Knaves (or four Debtors) are needed to cover the whole board. This variant has only two Knaves (or two Debtors) for each team. The white Knaves cannot capture the black ones and vice versa; the same holds for the Debtors.

It takes four Knaves (or four Debtors) and a King to checkmate a lone King. With Shatranj rules, one Knave and a King win against a lone (bared) King, unless the King can capture the last Knave immediately after loosing his last servant.

Some german translations: The game is Shatranj mit Spitzbuben und Dabbessen, Spitzbube means Knave (this is the translation of one meaning of Knave and the initial Sp- relates to Springer [Knight]), Dabbes (pl. Dabbesse) is a south-west german dialectal word meaning clumsy one, dabbler and it is choosen because its sound relates to Dabbaba. So the names of the pieces are hints to their forward moves.