This page is written by the game's inventor, Daphne Snowmoon.

You can even actually play Pandemonium on the bot-spam channel on Pychess Discord! 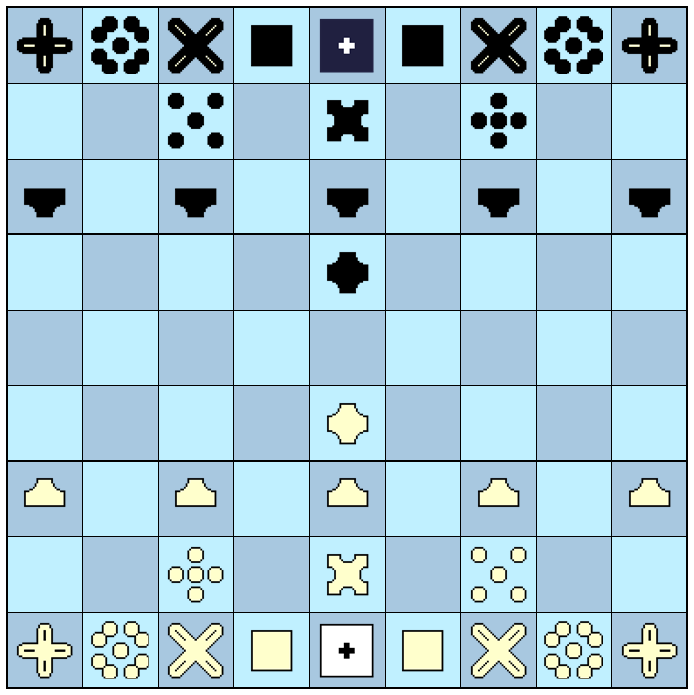 The promoted piece moves in the form of a combination of the moves of the other two pieces.

Pawn (P. Jol卒) : Moves one square orthogonally forward or sideways. Of course, the White Pawn and the Black Pawn move in direction facing each other. Promotes to Guard.

Guard (G. Cho哨) : Moves like a King, but non-royal piece. 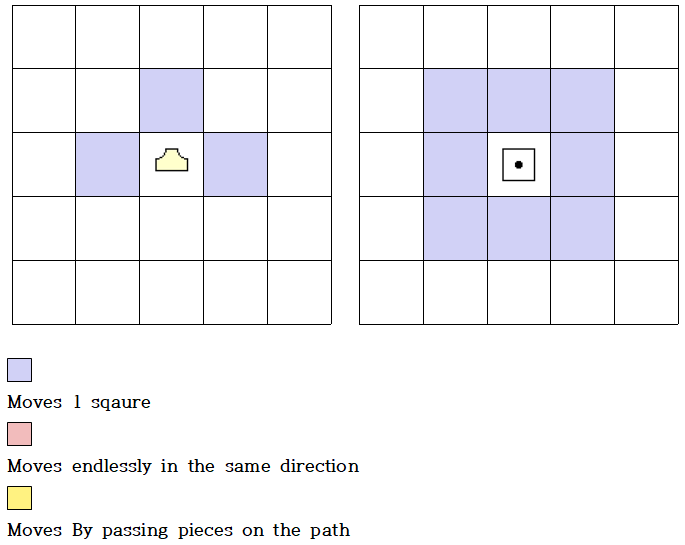 Bishop (B. Gak閣) : Moves any number of squares diagonally. Promotes to Horse.

Knight (N. Gi騎) : Moves one square orthogonally and then one square further diagonally. It can go for a total of eight squares. It can pass pieces. Promotes to Kangaroo.

Kangaroo (O. Dae袋) : Moves like a Knight, or an Alfil.

Marshal (M. Won元) : Moves like a Rook or a Knight.

Alfil (A. Yu遊) : Moves 2 squares away diagonally. It can pass pieces. Promotes to Cardinal.

Cardinal (C. Ye猊) : Moves like a Bishop or a Knight.

- It is the only piece that can make a checkmate alone.

Bull (U. U牛) : Moves 2 squares away orthogonally. It can pass pieces. Promotes to Judge.

Judge (J. Pan判) : Moves like a Commoner or a Knight.

Yang/Eum (K. Yang陽/Eum陰) : Moves one square orthogonally or diagonally. It does not promote. When called without distinction between Yang and Eum, it is simply called King宮. (therefore, in notation, Yang and Eum are written as same K.)

- The state in which your King is attacked by enemy piece is called check將. if your King has no way to get out of the enemy's check on that turn, call it checkmate and you are defeated.

-  At any time, the King cannot move to a square attacked by his opponent's piece.

2. White moves first, and Black moves next. They move alternately and the game continues until one player is defeated.

3. There is no passing a turn.

4. There is no Castling.

2. Promotion is not compulsory. So, you may not promote a piece if you don't want to. However, a piece that has left the enemy camp without promoting cannot be promoted until it reaches the enemy camp again.

3. The promoted piece cannot go back to before being promoted until it is captured by the enemy.

4. When a promoted piece is captured, it goes back to before promotion. That is, promotion is initialized.

5. There is no limit to the number of pieces that can be promoted. In other words, all 34 pieces except the King can promote freely.

2. A hand piece may be placed on any empty square on the board, which is called a drop.

- Only one piece may be dropped on the board per turn, and this must be done instead of moving a piece on the board.

2. On the turn you drop a Piece in promotion zone, that piece is not promoted. After being dropped, it can be promoted only by moving it.

3. You can deliver a check or checkmate to your opponent by dropping a piece.

4. Unlike Shogi, Pawn can be moved or dropped into a file with other friendly Pawns, and can also drop a Pawn to make checkmates.

3. Unlike Shogi, Pawn can be dropped even at the last(9th) rank, and when reaching the last rank, it can still choose to promote or not.

The player who can no longer move or drop pieces loses.

- Even if it does not appear in a row, if the same state occurs 3 times in a game, threefold repetition is established.

(Of course, it is also impossible to repeat the check consecutively.)

When you surrender, you declare surrender by placing your King on your piece stand.

One of the unique features of Pandemonium is that Castle is unnecessary.

There are many gaps between the Pawns, and there are already powerful pieces in the center. So it's more efficient to center the scattered Pawns and protect the King rather than evacuate the King to a corner like Chess or Shogi.

Of course, there are plenty of leapers (pieces that can pass through the pieces in the path), so be careful, blocking the King's escape route while also making a solid defense can be a bad idea.

(That doesn't mean it's always safe for the King to stay in the middle. You also need to know how to evacuate the King depending on the situation.)

- You can play Pandemonium by downloading the file in the site. 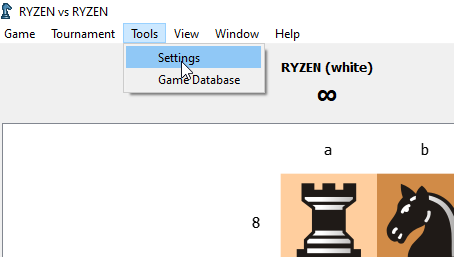 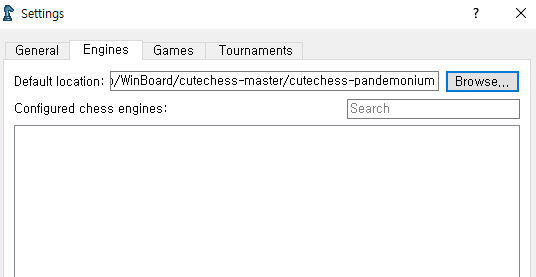 2. Set the path of the folder downloaded through Browse. 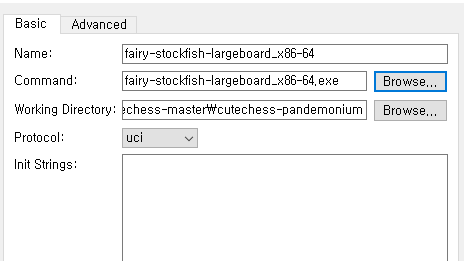 4. Click Browse on the right of Command -> select fairy-stockfish-largeboard_x86-64.exe.

5. Add ' load variants.ini' to the end of the sentence on the right side of the Command -> click Ok.

6. You can use the engine now! 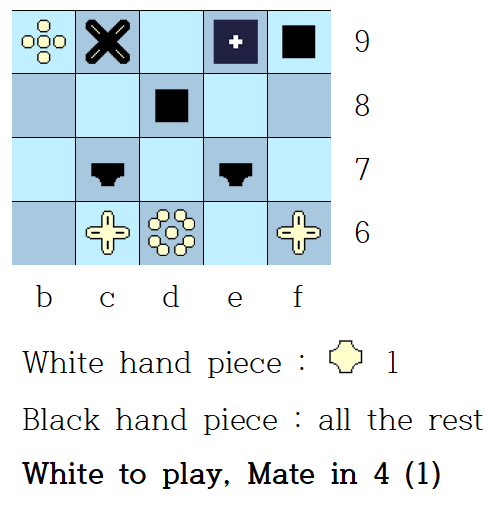 - Tip : e8 and f8 are blocked by Knight and Rook. Aim for point d9, the only place the Black King can go. 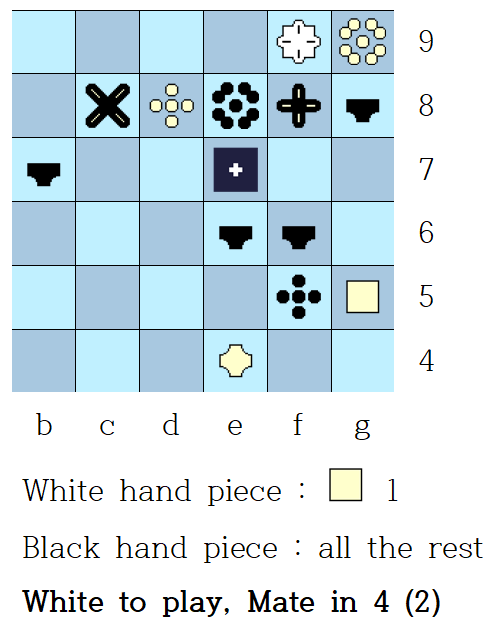