This page is written by the game's inventor, Andrew L Smith. 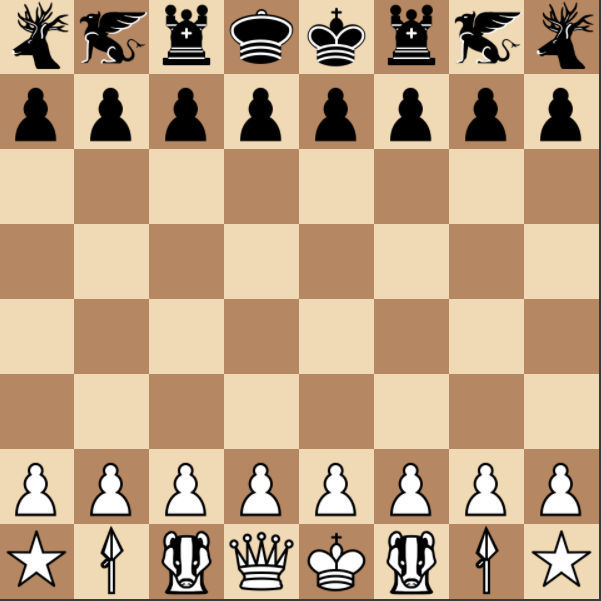 In place of the Rooks, there are Stars. They move forwards or sideways like Rooks, but backwards like Bishops.
Funny notation: flrRbB.
Text notation: ST

In place of the Knights, there are Lancers. They move like Kings, but they can also go forward as far as they like, like the Lance.
Funny notation: KfR.
Text notation: LK

In place of the Bishops, there are Sealed Boars. They move sideways like Rooks, or 1 square diagonally.
They are inspired by the Side Movers from Chu Shogi and their promoted counterparts, the Free Boars.
Funny notation: FlrR.
Text notation: SR

The Queen already fits the theme of unlimited range peices that aren't colorbound, so she is unchanged.
Funny notation: RB
Text notation: Q

No rule changes from standard Chess with Different Armies

Personalities of the Pieces

Much like the Rook itself, the Starbound Sliders are weak in the opening but strong in the endgame. Defence and trading is the name of the game here!

The Star is very similar to the Rook in properties, purpose and value. The backwards bishop moves make it slightly better at retreating, at the cost of being unable to go straight back home after an opportunistic forward move.

The Lancer is quite strong as far as minor pieces go. It can protect the centre using its King moves once it gets there (though this does take a while from b8 and g8), but its main ability is that it is by far the best pawn escort of all the minor pieces. If you can put a Lancer behind a passed pawn, your opponent is in trouble!

The Sealed Boar is very slow to develop, as it can only go forward one square at a time. It also cannot attack pawns that are ahead of it, as its only forward moves are the same as the pawn's captures. It has to go around the pawns to attack them from the side or behind. That said, it's ability to defend an entire rank as a minor piece makes it reasonably useful on defence, which is vital on a team as slow as this one. Fianchettoing the Sealed Boar is an especially good defensive resource.

Total: 31.5
This makes the Starbound Sliders just as strong as the Fabulous FIDEs, which is pretty weak by CwDA standards.

The lancers are great fun to use! Their use in checkmating attacks alongside the stars and queen is something I didn't expect when designing the lancers, but it was still great when it happened. Also, like with the Nutty Knights, it is very easy to overextend with the lancers, which leads to intense moments where the Starbound Sliders is bringing back a lance while the other team is launching an attack elsewhere.

When playing as the starbound sliders, defensive pawn structures like the French and the Hedgehog are ideal for weathering attacks while you develop. Trading pawns to open up the position can be useful too, as this army loves open files! On the other hand, if you're playing against the starbound sliders, aggressively taking space and making closed pawn structures (which the Sealed Boars can't break through) is generally the strategy to go for.

You can play with the Starbound Sliders via ChessCraft on mobile