This page is written by the game's inventor, Jeff Cornell.

Solar Chess is the result of my attempt to find a more interesting tiling pattern than the standard square/hexagonal/triangular tilings, but which would still allow for interesting chess-like pieces and tactics. I settled on the "deltoidal trihexagonal tiling" after I noticed that the natural translation of the rook would move in a circular path. This also led naturally to a space theme, as these circular paths could be seen as "orbits" around hexagonal "planets" made of six tiles. The natural translation of the bishop has interesting behavior as well. But there doesn't seem to be a satisfying version of the pawn or knight on this board, so in order to have a third well-balanced piece, King-like movement is the natural choice. This leaves Queen-like movement for the royal piece. Shogi-inspired capture and drop rules ensure that the amount of material in the game does not (usually) decrease, so even a powerful Queen-like royal piece can be reasonably captured. This also greatly simplified the decision of a starting setup, as the majority of pieces can simply be "in hand" at the start of the game and be dropped into the board as play progresses. This in turn makes it very easy to generalize the game to many different numbers of players and/or teams.

Although there are only 4 different piece types, including the royal piece, the board geometry itself should make their interactions more interesting than on a more standard grid, and the specifics of the drop rules should further enrich the tactics enough to result in an enjoyably complex game.

The board consists of 72 kite-shaped quadrilateral tiles forming a hexagon. Tiles are given one of three distinct colors, to hilight lines of diagonal movement.

Players can control pieces of multiple colors, and can hold pieces of multiple colors in hand. The colors of pieces in hand are relevant, so pay attention to the colors of pieces in hand in the starting setups. The six colors pieces can have are White, Black, Red, Blue, Gold, and Silver. Pieces can change color throughout the game, so any physical set should represent the pieces with dice, with the same piece symbol on every face but in each of the six colors. The starting setup depends on the number of players, the number of players per team, and the number of royal pieces per player or team. See the table below for the setup for 10 natural variations of the game. 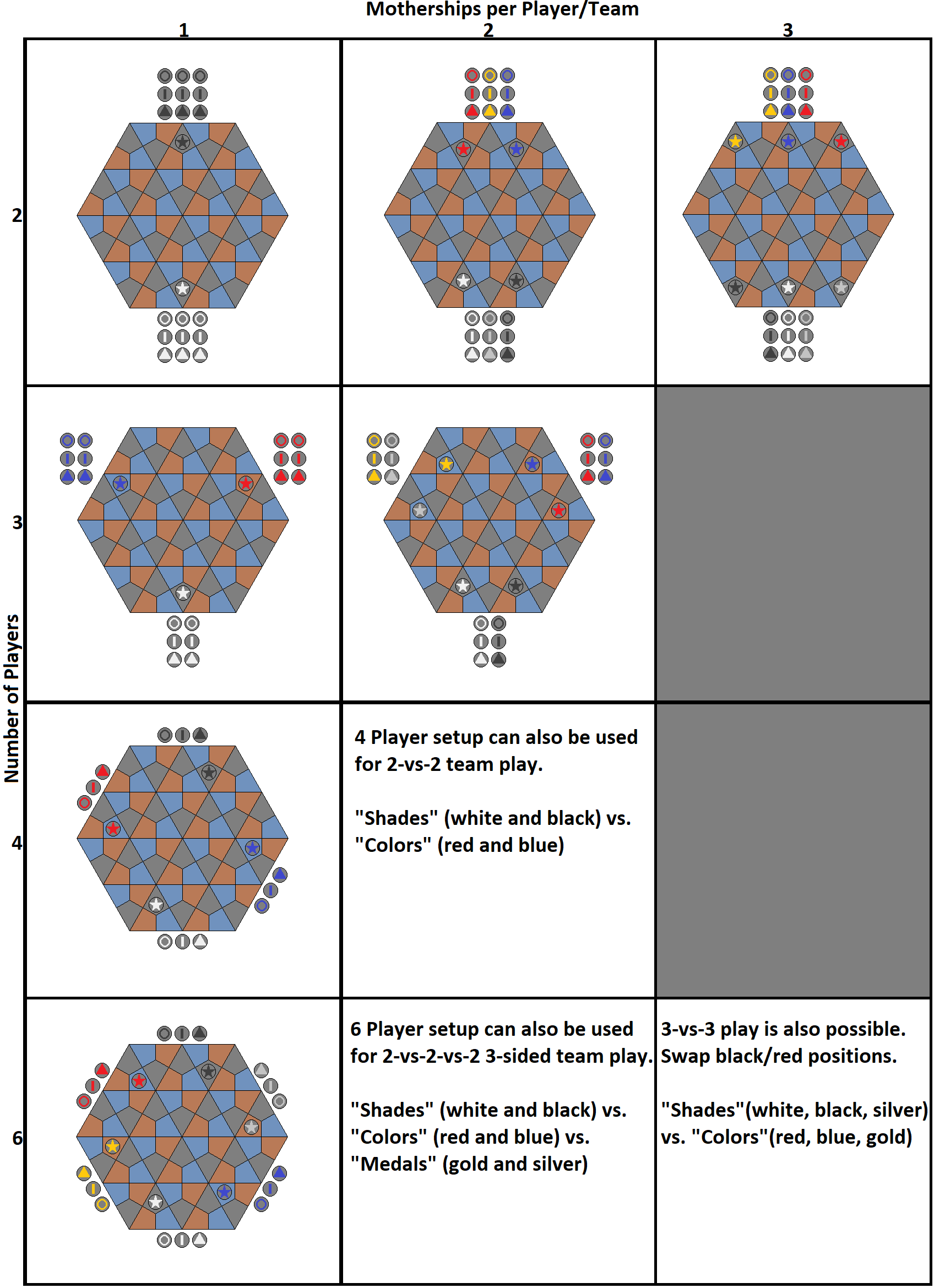 All pieces capture the same way they move.

The Orbiter moves though an edge to an adjacent tile, and may continue likewise through the opposite edge of the new tile through as many unoccupied tiles as desired. It is the natural translation of the rook, but due to the board geometry it travels in a circular path, hence its name (and the main reason for the space theme of this game). 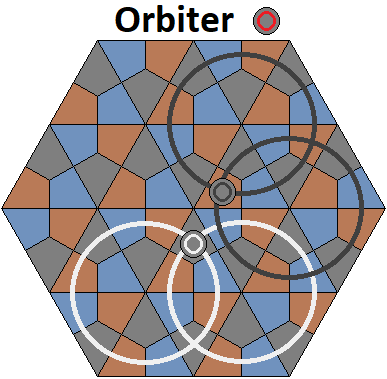 The Missile moves through a vertex to a tile which is vertex-adjacent, but not edge-adjacent, and may continue likewise through the opposite vertex of the new tile through as many unoccupied tiles as desired. Note that some vertices have only three tiles around them, so every tile vertex-adjacent via that vertex is also edge-adjacent, so the Missile cannot move through such a vertex. The Missile is the natural translation of the bishop, but due to the board geometry it is mostly restricted to a single axis of movement, with the only other options being three possible single-step moves through the six-tile vertex. Also unlike the bishop, the Missile is not color-bound. 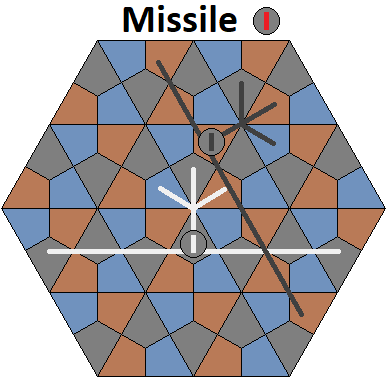 The Fighter moves a single step as either Orbiter or Missile. 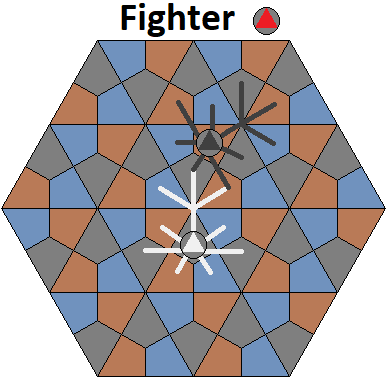 The Mothership moves as either an Orbiter or Missile. A player with no Motherships is eliminated from the game, except during team play, in which a player remains as long as someone on the team still has a Mothership. The Mothership also plays an important role in piece drops. See the "Rules" section. 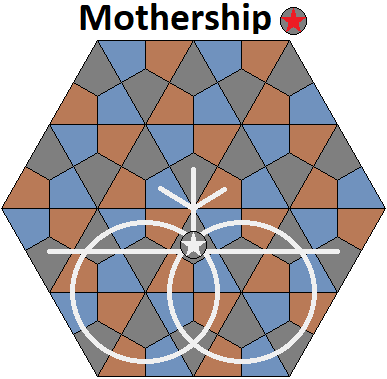 A player must effect a change to the state of the board on his turn if possible. So it is not permitted to effectively "pass" a turn by moving an Orbiter or Mothership through a complete circle back to its starting tile. However, a player with no legal moves may (and must) pass his turn.

If one of the player's pieces would be able to move to the tile occupied by a Mothership under his control (if not for the fact that the Mothership already occupies the tile), then the player may "dock" the piece to the Mothership. The piece is taken in hand, and its color is changed to match that of the Mothership in question (if it doesn't already match). During team play, a player may also dock his piece to a teammate's Mothership, sending that piece to his teammate's hand.

When a (non-Mothership) piece is captured, the capturing player takes the piece in hand, and its color is left unchanged.

When a Mothership is captured, it is removed from the game, but any pieces of the same color in the hand of the player who controlled it are sent to the hand of the capturing player, and their color is left unchanged. If a player's last Mothership is captured, all pieces in that player's hand are given to the capturing player regardless of color, and their color is changed to match that of the captured Mothership.

When a team controls no Motherships, all players on the team are eliminated from the game. Any pieces of theirs still on the board are left where they are, not under the control of any player. These inactive pieces may be subsequently captured by any remaining player and taken in hand as normal.

When, during team play, a player has no Motherships but has not been eliminated (because at least one teammate still has a Mothership), any pieces captured by that player are removed from the game rather than being taken in hand.

The player with the white Mothership moves first, and play proceeds clockwise from there. Victory is achieved by eliminating all opposing players/teams, by capturing all of their Motherships.

One possible coordinate system for the board. 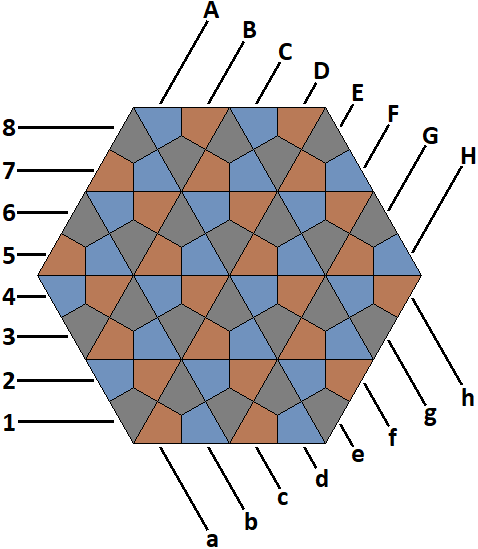