This page is written by the game's inventor, Samuel Trenholme.

Since 1994, I have wanted to create a playable chess variant using a particular tessellation that the Wikpedia calls a 33344-33434 tiling.

When I was trying to come up with a chess variant with this tiling back then, my then roommate said my board looked like a “Turtle Shell”, which is why this variant is called “Turtle Shell Chess”.

It took me 28 years, but I have finally formalized the rules for “Turtle Shell Chess”.

This is an open content public domain chess variant: Anyone is free to implement this variant or make their own modifications to this variant without asking permission. This variant, its rules, the wording used here to describe it, and all diagrams here (including the free to download high resolution board diagrams) are all public domain. 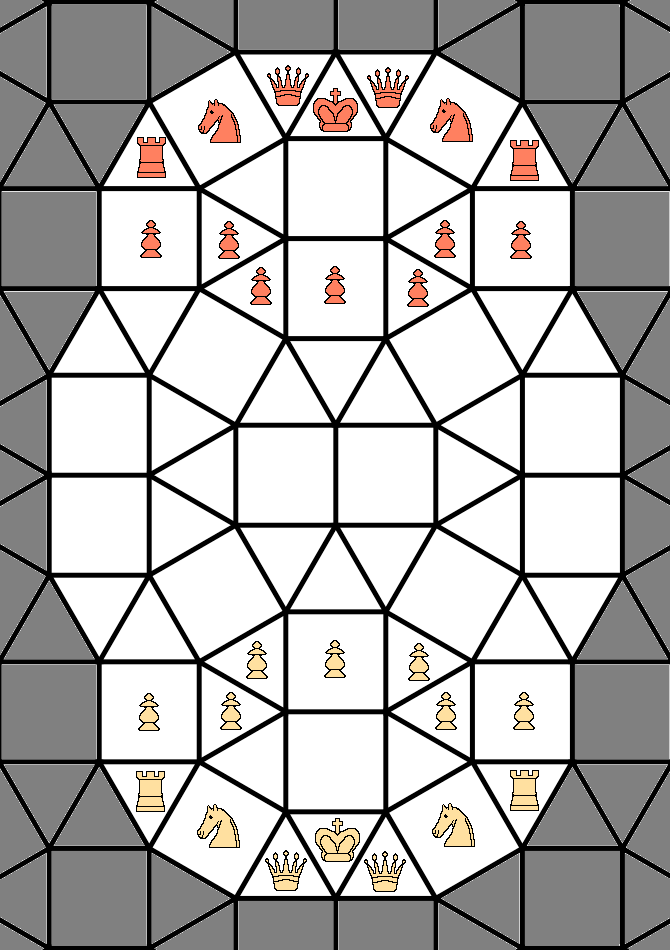 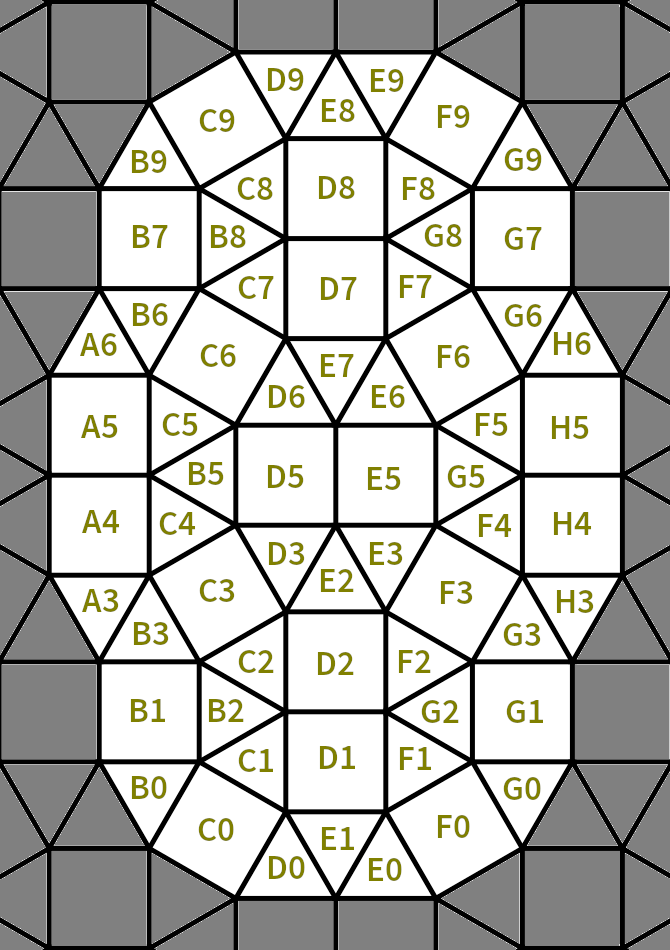 The board has 10 rows in it. Because of the nature of the tiling, some cells are in more than one row. Rooks can move left and right along rows. 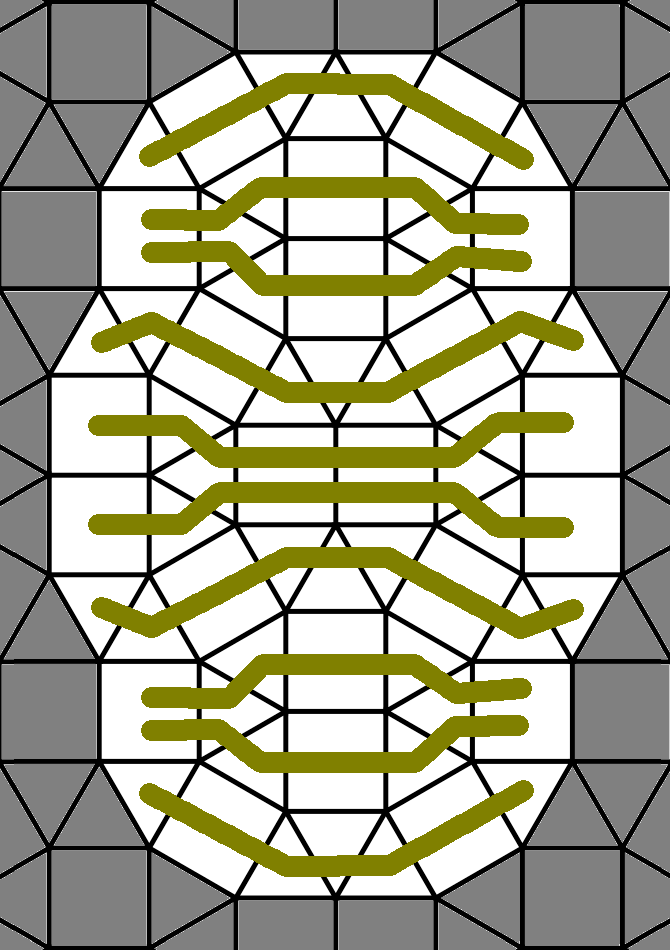 The board has six files. As with rows, some cells are in more than one file. Rooks can move up and down files, and pawns can move as well as capture one square towards the opponent’s endzone on a given file. 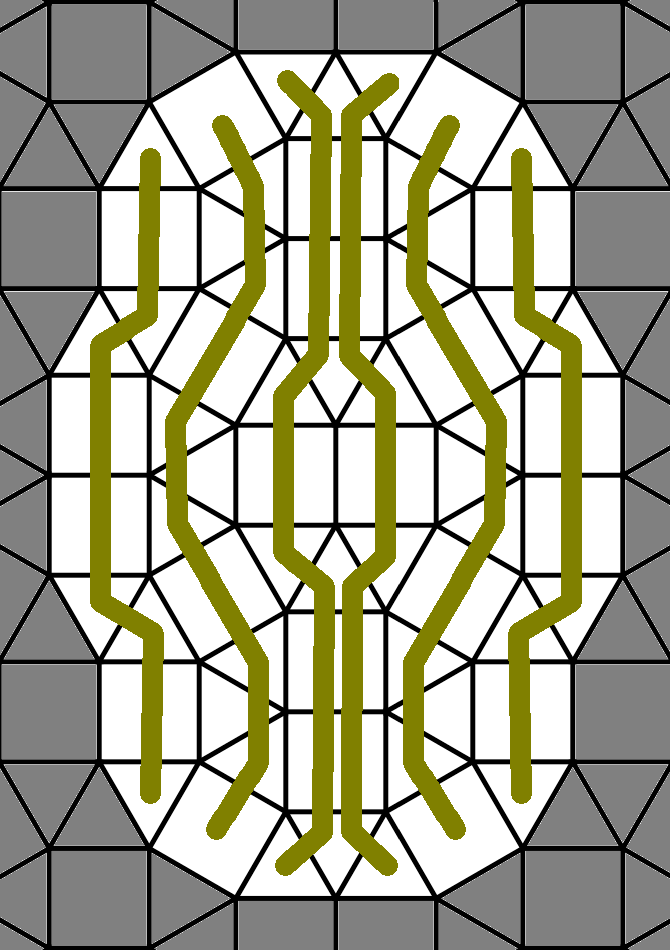 A rook may move any number of cells along a row or file. A rook must make an entire single move along the same row or file; for example, a rook on D0 may move to D3 (which is on the same file) but may not move to E3, because moving to E3 is only possible from D0 if the rook changes the file they are on during the move. 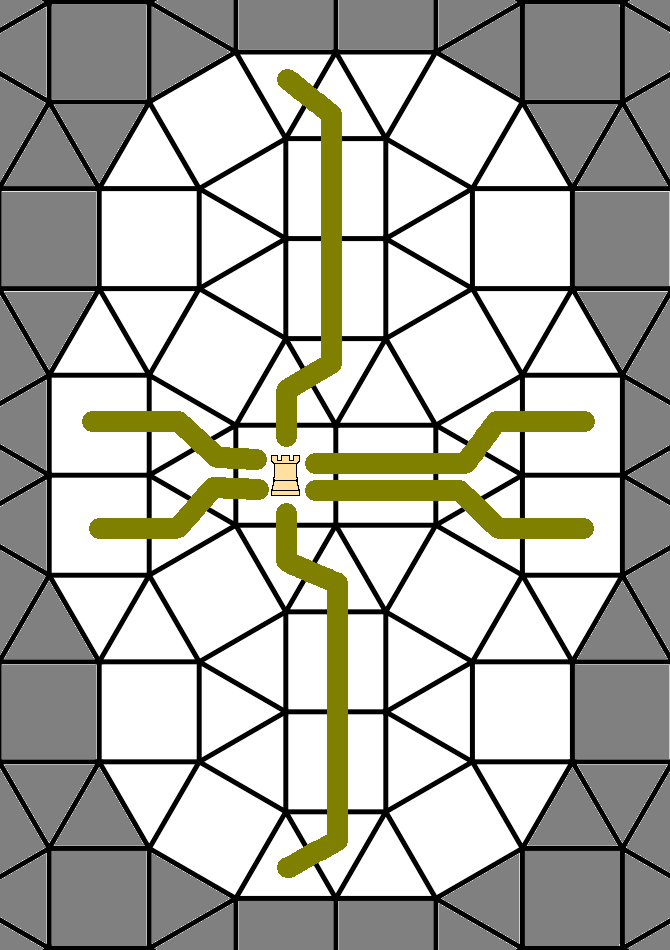 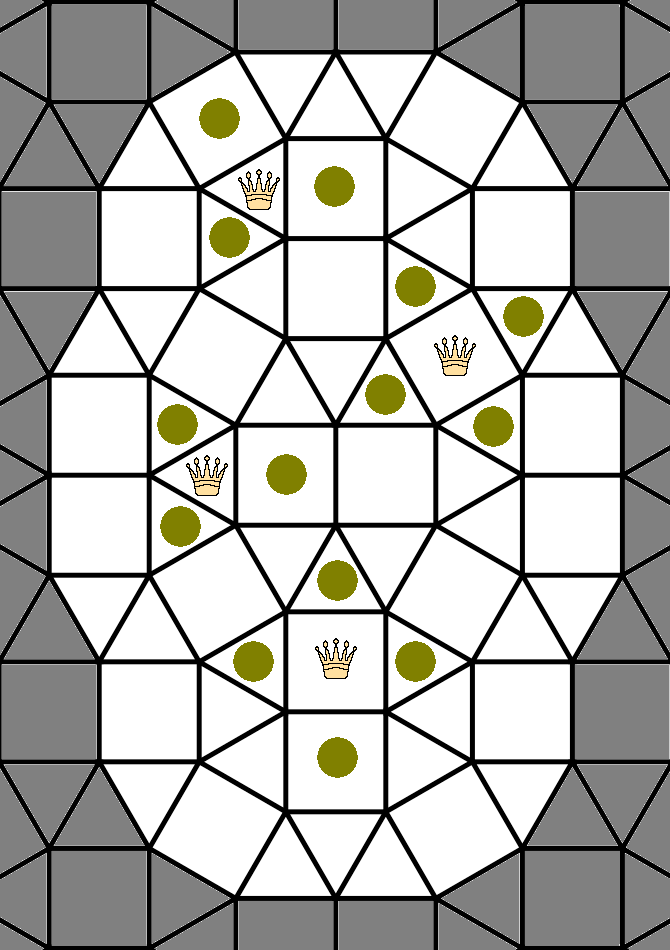 A knight in Turtle Shell Chess may move or capture to any cell that it shares a corner with, as long as the cell in question does not share an edge with the cell the knight is in. A knight, if in a triangle cell, may move to up to six different cells. If in a square cell, a knight might be able to move to up to eight different cells. 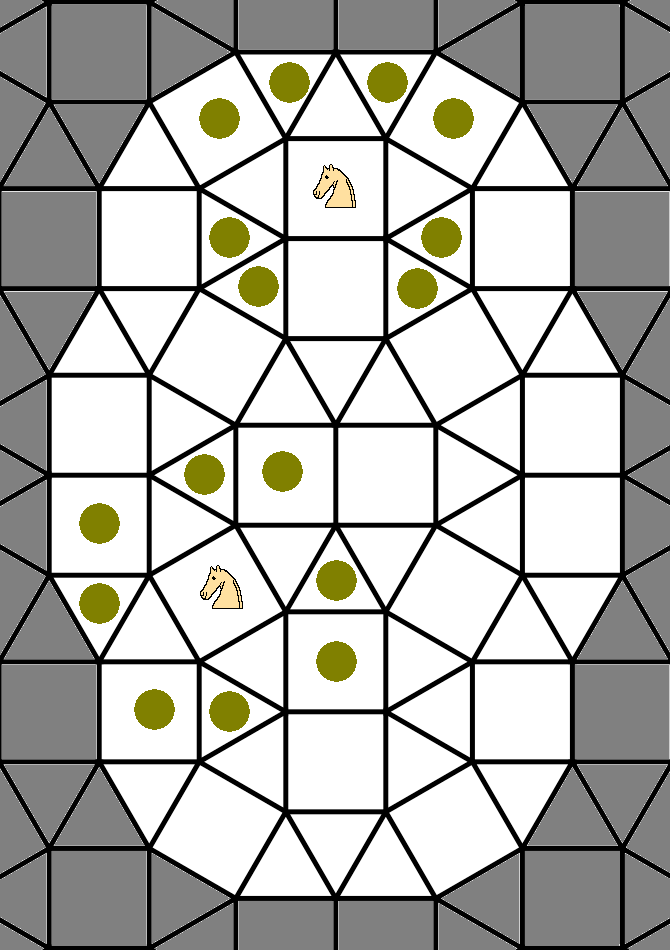 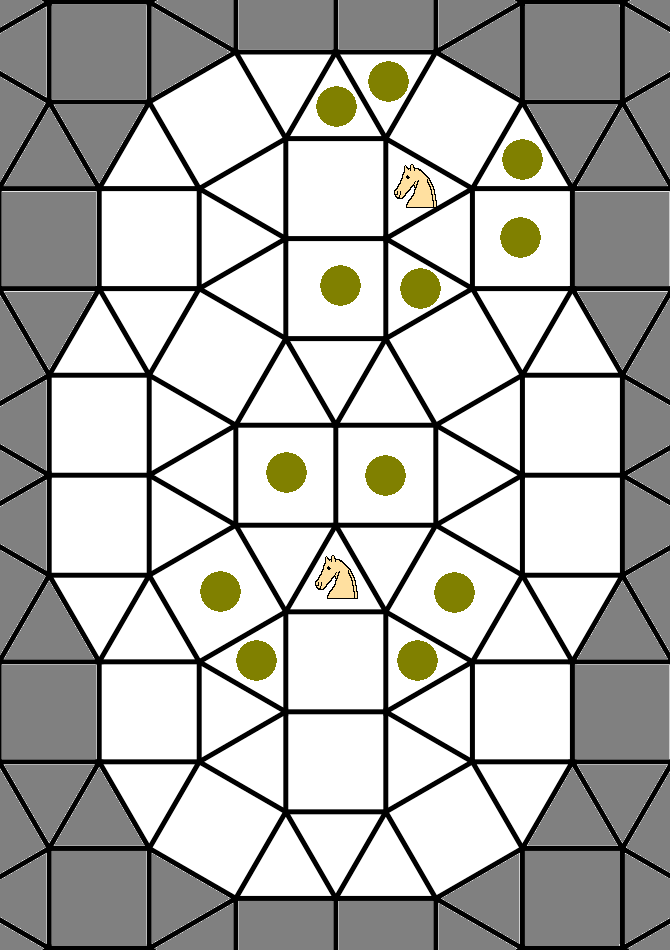 A king in Turtle Shell Chess moves like a guard, but is royal (it can not be captured, it can not move in to check, it can be checkmated). If a king ends its turn on a square in the opponent’s end zone without being in check, the game is immediately won for the person who moved their king across the board. 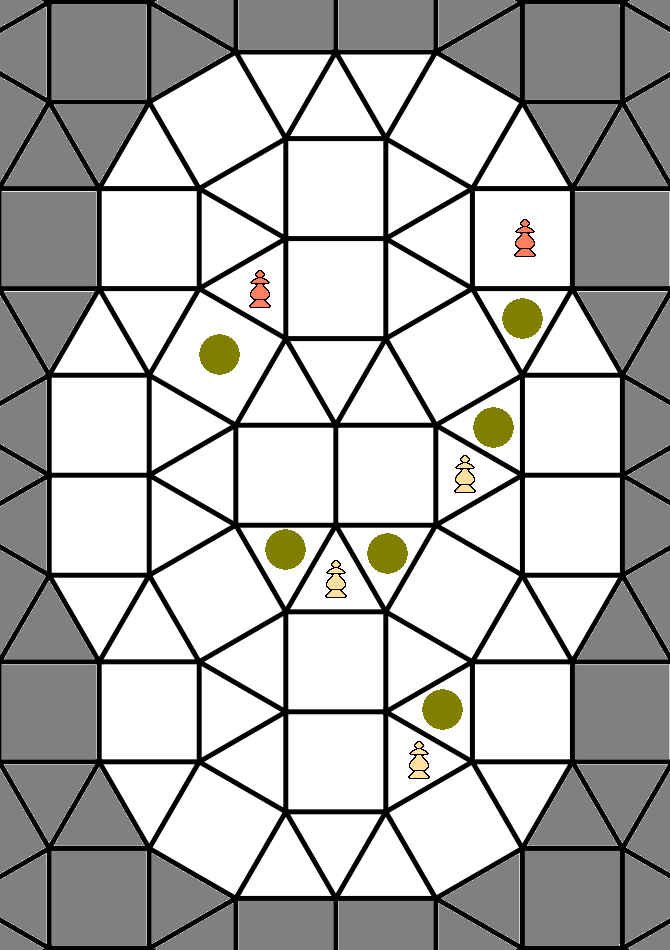 To help illustrate the pawn and king, it is necessary to show the promtion zone then the end zone. First, the promotion zone 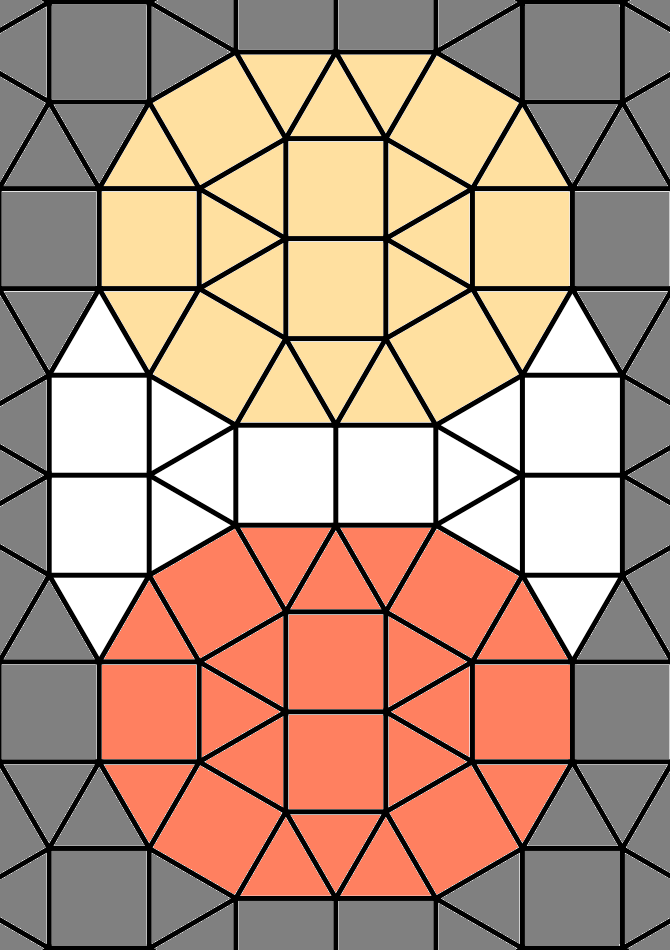 And the end zone: 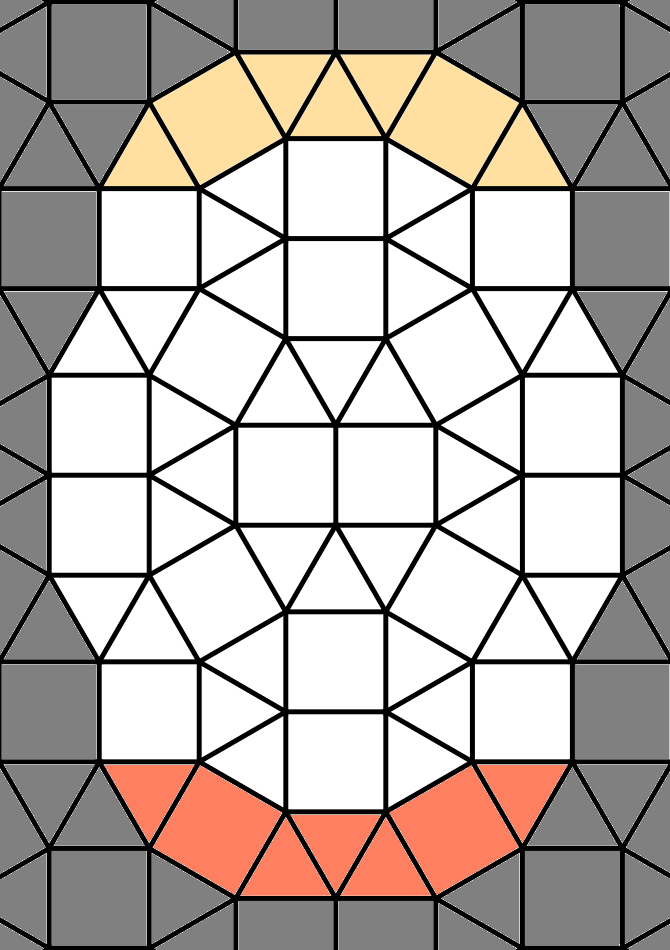 The object of the game is to checkmate the opponent’s king, or to place one’s own king on a square in the opponent’s end zone without the king being in check. Stalemate is losing for the player giving stalemate.

Similar to Xiangqi, there is a complicated “no chasing” rule to avoid repetition: If making a move which recreates a position previously played in this game, with the same player having the move as the previous position, the attacking player must stop the loop. An attacking player is defined as the player who, for all board positions in the loop, just after the attacker has moved, more capture threats (including check) are on the board regardless of the color of the piece making the capture threat. This is calculated by adding together all possible capture moves for each unique board position in the loop per player. In case this sum is the same for both players, the player who gives check more often (i.e. has more king capture threats, where a double check is 2 threats) in the loop of moves is the player who must make a different move to break the loop. In case the sum of possible captures is the same for both players during the loop, and both players give the same total number of checks (0 or more) in the loop, the player whose move starts the loop must make a different move to break the loop. This is a modified “Ko” rule. When playing with a computer, the computer would enforce this rule. When playing on a physical board, the rule would be more subjectively enforced: Someone appearing to attack an opponents piece resulting in a repeat of a previous position would be asked to stop the attack by making another move or forfeit the game.

This game may be played with an ordinary chess + checkers set using a custom printed board; place a checker under a pawn to indicate the pawn in question has been promoted. Here is a free high resolution board image for playing this game, both as a PNG image and as a PDF file:

There is a free Zillions of Games implementation of this game available, but one will need a license for Zillions of Games as well as a computer which can run Zillions (I have tested it in both Windows 10 and Linux using Wine; it runs in both environments):

Notes about the game design:

Other pieces and boards

The above rules describe the core Turtle Shell Chess rules. However, one may wish to extend this game by adding other pieces to the board, or by playing on a different board. I will go over some possibilities.

Other possible optional pieces include:

There are various possible ways to implement diagonal moves on this tiling. The one I find the most intuitive results in color-bound bishops: Bishops either stay on square cells, or they stay on triangle cells. I will first illustrate this diagonal move with three images: 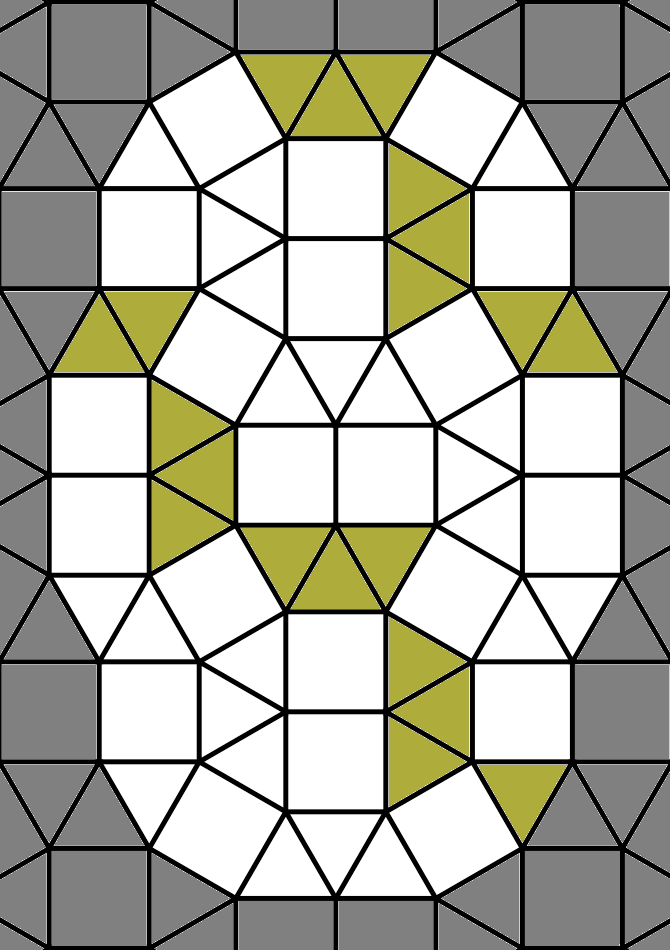 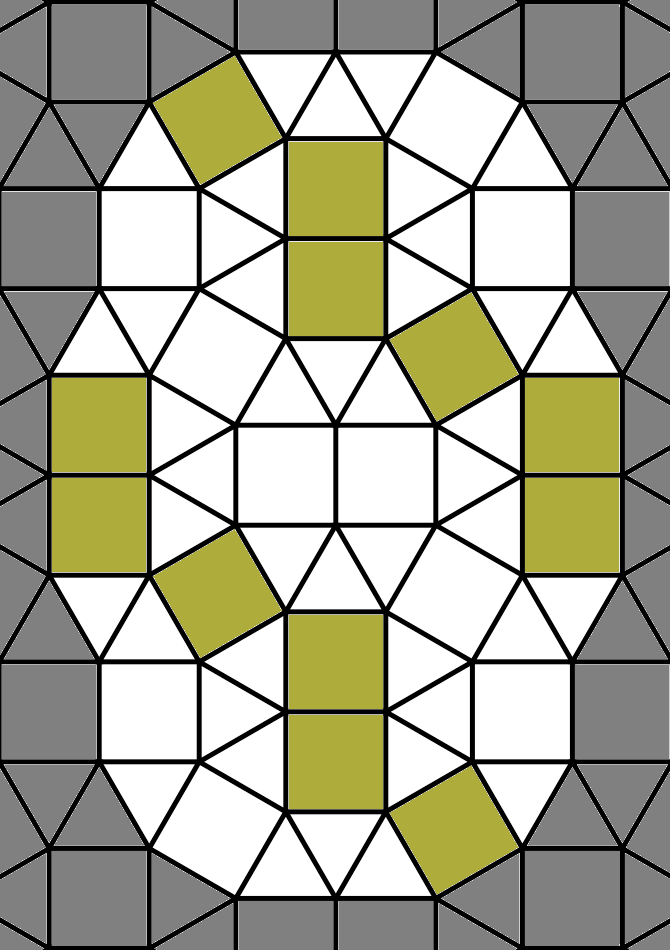 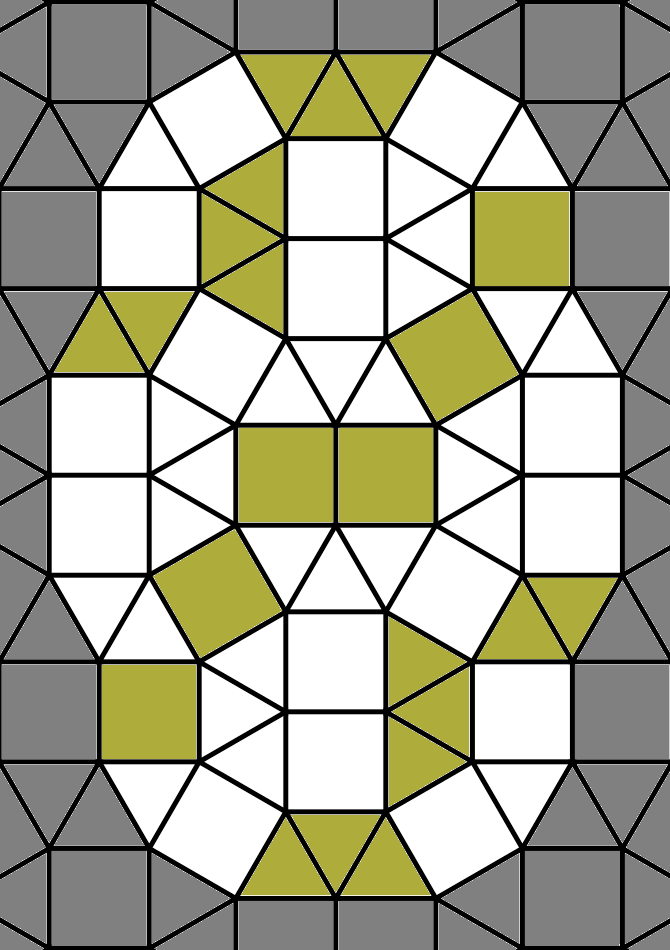 The rules for diagonal moves are as follows:

The rules for moving diagonally one of the directions are nearly the same for each direction, as follows:

To clarify with triangles:

The result of this is that diagonal moves will be on a jagged path, alternating between moving straight along a clump of two squares or three triangles, then moving diagonally from one group of cells to another group. 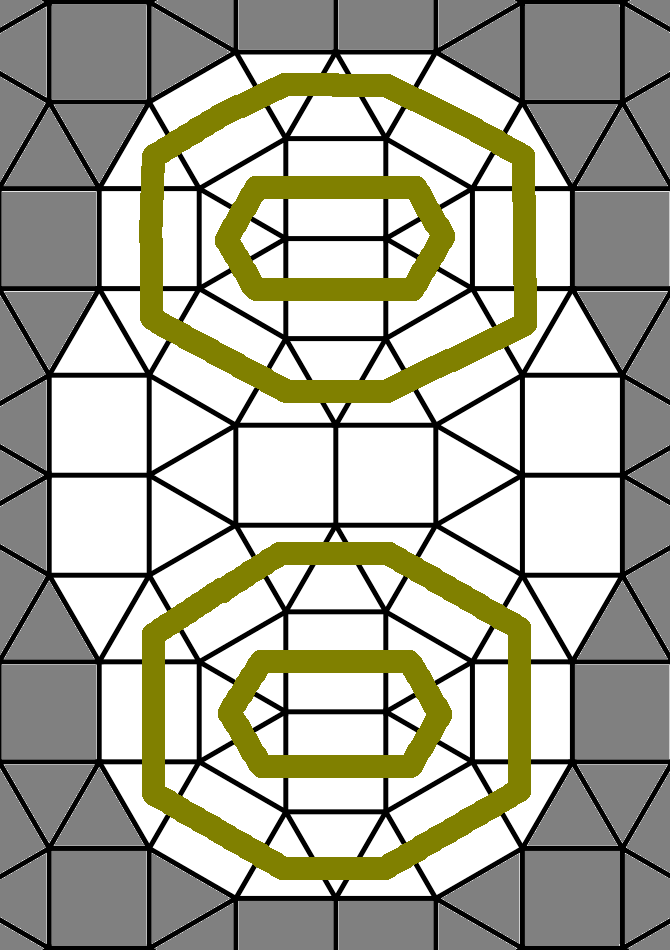 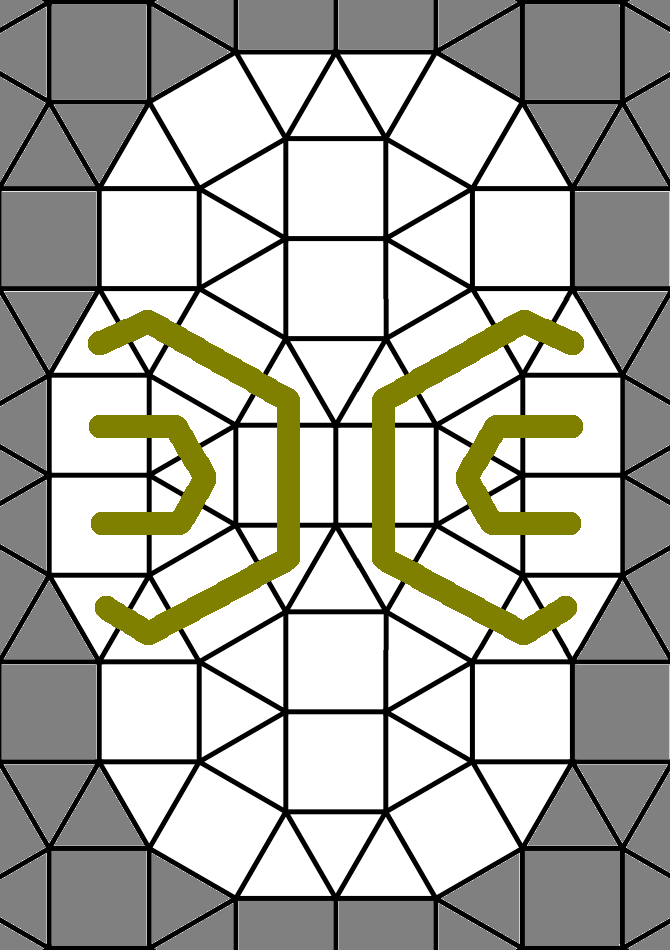 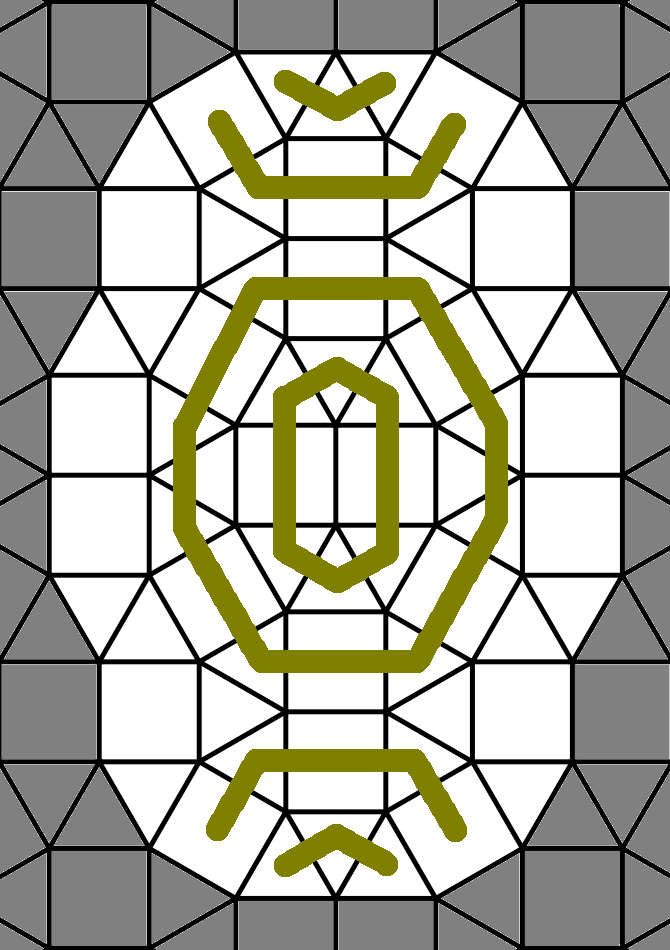 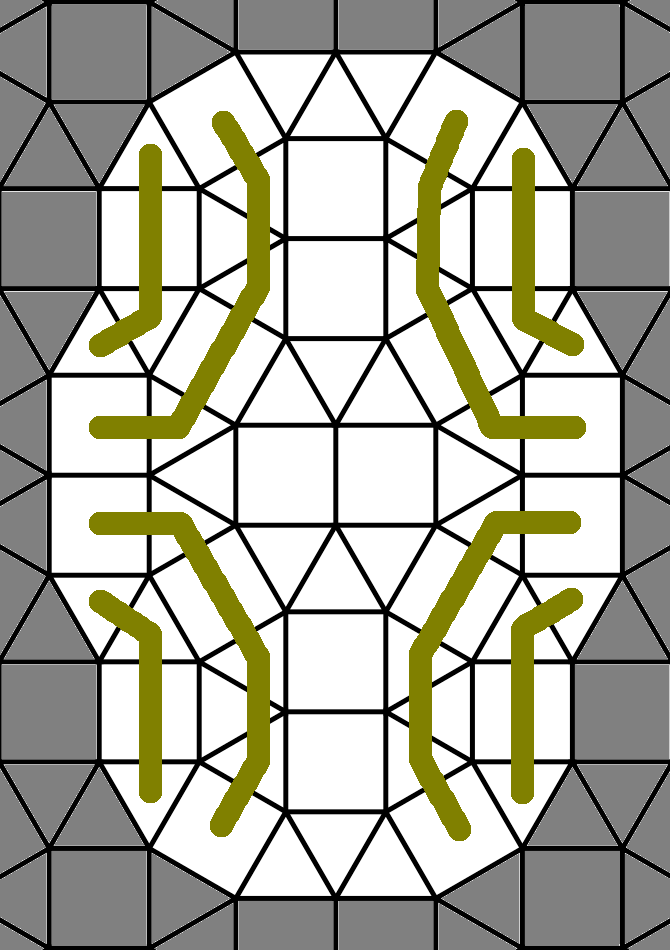 The circular movers might not be intuitive enough, and there’s issues that they could make the tilted square cells on C3/F3/C6/F6 too powerful.

In the Git repo I have with Turtle Shell Chess, I look at a number of other possible boards one can make with the same tesselation of squares of triangles. I will show one of those boards here, a board with 104 (instead of 64) cells: 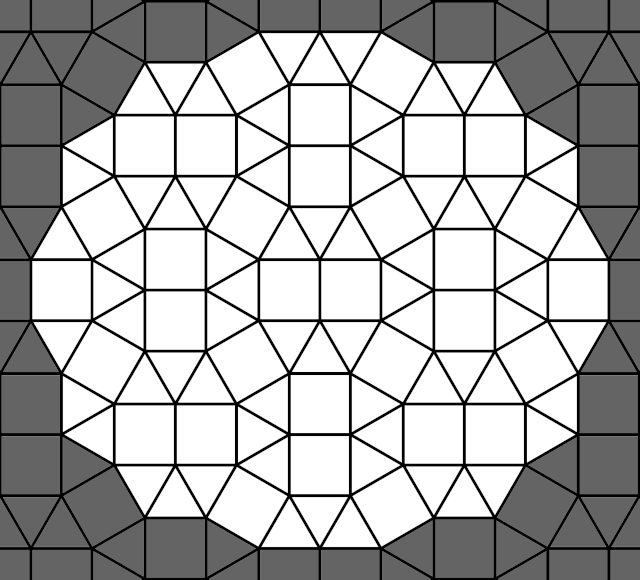 I dedicate the rules of this game and all graphics and code illustrating this game to the public domain.